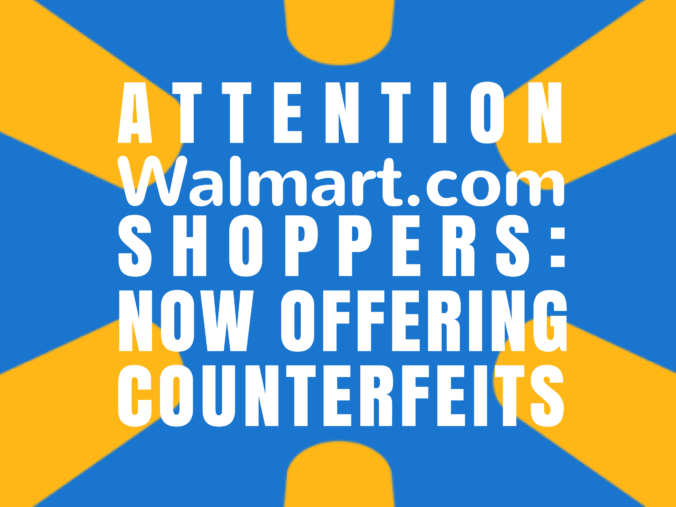 In an effort to compete with Amazon, Walmart.com has significantly increased its product selection by offering items from third-party sellers. While third-party offerings provide consumers with more options, online shoppers may want to proceed with caution.

Launched in 2009, Walmart’s Marketplace allowed select retailers to list their products on Walmart.com. Recent partnerships have ballooned Walmart.com’s product selection from 10 million to more than 50 million items in the past year alone. All of which is due to an increased number of third-party marketplace sellers.

By offering a wider selection, Walmart.com has become more attractive to online shoppers. The site is now the 3rd-most-visited e-commerce site in the U.S., with 89 million unique visitors per month, according to comScore.

But with this success has come a problem that troubles open marketplace retailers like Amazon.com and eBay: the sale of counterfeit products.

The Counterfeit Report has repeatedly found and submitted complaints to Walmart, authorized by the trademark holders, for counterfeit items found on its website. Yet months later, some items remain while others are removed, but then are relisted.

As the top retailer in the U.S., most consumers would perceive Walmart as a trustworthy merchant of authentic goods. But online shoppers, who are unaware of third-party items, misplace their confidence when shopping online at Walmart.com.

Walmart Marketplace items include items from international companies, like China – the counterfeit capital of the world. These items show up right alongside Walmart’s own inventory leaving little differentiation between the store’s verified merchandise and potentially counterfeit third-party goods.

Walmart has recently been criticized for not monitoring its marketplace counterfeit problem. The Counterfeit Report, a self-described consumer advocate and watchdog, “has repeatedly found and submitted complaints to Walmart, authorized by the trademark holders, for counterfeit items found on its website. Yet months later, some items remain while others are removed, but then are relisted.”

While it’s impossible to prevent counterfeits completely in an open market, Walmart is failing to remove even reported counterfeits from their site. You’d think a nationally recognized brand like Walmart would be proactive to protect their customers from fakes. For the time being, Walmart.com shoppers may want to steer clear of the online aisles.

What’s your take? Does the risk of purchasing counterfeit products affect your willingness to shop through Walmart.com?